Katie Holmes speaks about her relationship status and her daughter, Suri 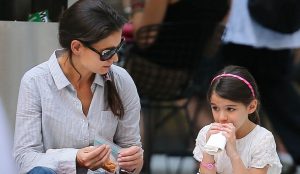 Holmes was asked if she was married in secret to Jamie Foxx and to that she replied that she was not married, but she didn’t respond to the dating rumors.

However, the star was very open about her relationship with her daughter; Suri, who is now 10 years old. Holmes said that Suri is the most important part of her life and she always wants Suri to know how important she is.

Her latest film, “All We Had” has been dedicated to her daughter, mainly because Katie feels that Suri is her inspiration for everything. Holmes also feels that the Hollywood lifestyle can confuse children at a young age and therefore is keeping “Hollywood” out of Suri’s life as much as possible.

She said that she tries her very best to ensure that Suri’s environment is all about being a child. The star enjoys being a mom and has read many books to make herself a better mom for her daughter. However, she says that there are days that she feels that she could have done better and good days when she pats herself on the back for a job well done. Being a mom for Holmes is an experience that she says she will cherish for the rest of her life and she is looking forward to growing and learning to be a better mom for her daughter.