In a recent interview with Charlie Ross, George Lucas criticized Disney for handling the “Star Wars” movie’s characters, by saying that he had sold his characters to “White Slayers”.

At the interview Lucas stated that he will not be involved in the making of the movie and then criticized Disney’s approach to the movie. This interview which was held prior to the movie’s premiere, where CEO of Disney Bor Iger thanked Lucas and said that Lucas was a “sheer Genius” in creating “Star Wars:. The Force Awakens” 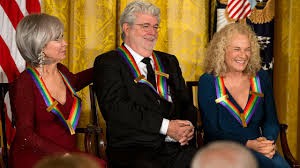 Lucas’s apology, which was released on Thursday stated “I rarely go out with statements to clarify my feelings but I feel it is important to make it clear that I am thrilled that Disney has the franchise and is moving it in such exciting directions,”.

He went on to say that “I have been working with Disney for 40 years and chose them as the custodians of ‘Star Wars’ because of my great respect for the company and Bob Iger’s leadership,” ….”Disney is doing an incredible job of taking care of and expanding the franchise.”

Lucasfilms was sold to Walt disney in 2012 for $4.06 Billion. Disney intends to make two more films from the “Star Wars” films in the coming years.

The movie that hit cinemas on the 14th of december has gathered positive reviews from both fans and critics. Within just 2 short weeks the movie has now grossed the 8th highest place for all time globally.