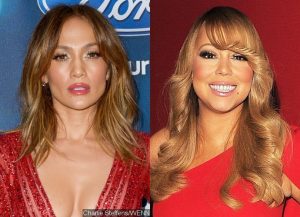 In the early 2000, Mariah said that she didn’t know who Jennifer Lopez was. Carey’s comment, started a rumor that the pair were feuding. When asked in 2015 about the comment, Carey said that she “was just being honest” when she made the remark.

JLo spoke about the “feud” recently on “The Wendy Williams Show”

Lopez spoke about her Las Vegas Residency and admitted that she checked out the competition before she signed her deal. However, she said that she was not able to catch Mariah’s performance. JLo said “I didn’t see Mariah because at the time, she wasn’t playing,” Williams responded, “Who? No, I’m playing. That’s what Mariah said about Jennifer one time.”

JLo joked off the comment by saying “She does say that. She’s forgetful, I guess! We’ve met many times. I don’t know … I don’t know her that well.”

Lopez addressed the same issue on an appearance on “Watch what happens live”. When asked why she still hadn’t seen Carey’s Vegas Performance, she said “I think last year when it started, I was already here in New York filming ‘Shades of Blue’ and doing ‘Idol’ on the weekends — didn’t have a lot of time. Then I started preparing my own. I don’t think there’s been a time when I could have seen it.”

She cleared the air by saying “There’s no feud!”

In 2014, on the same show, she said during an appearance “I know from back in the day, I’ve read things that she’s said about me that were not the greatest, but we have never met. Like, we don’t know each other. I think it’s kind of from word-of-mouth of things that have happened in the past that I’m not really aware of.”