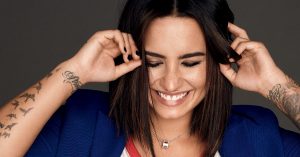 Article written by : Fashion Of The Celebs

Lovato is said to be spending time with Luke Rockhold, who is a UFC fighter. The pair had met when she was training at Unbreakable Performance Center in Los Angeles. The singer is playing it cool and not jumping into the boyfriend-girlfriend pool just yet.

Sources say that the romance is new and fun at this point. Demi is not interested in getting into a serious relationship as yet since she just broke up with Wilmer Valderrama.

The singer is said to enjoy Luke’s relaxed attitude and his sense of humor. Friends of the star said that she is taking the relationship and life a day at a time and enjoying every minute of it.

The pair has been training and have recently stepped out to enjoy a Los Angeles Rams football game where they posed for photographs. Eyewitnesses said that the pair were not overly affectionate but had chemistry since they were sitting very close to each other while watching the game.

Lovato came out of the six-year relationship in June this year, when she decided to call it quits with Wilmer Valderrama. Since then the singer has kicked her fitness into high gear and shares many fitness videos and pictures on social media.

Lovato is a fan of UFC and was seen attending her first public event after the breakup at a fight in Los Angeles. Coincidently, this fight happened to be one that Luke was competing in.