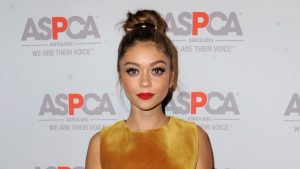 The modern family star Sarah Hyland spoke on social media about speculation that she has been suffering from an eating disorder.

Hyland said that she normally would not address issues such as her weight but she felt that she needed to clear the air. She went on to say that she had had a difficult year and this had caused some physical changes. The star did say that she would explain what she is going through when she feels more comfortable in discussing the matter.

The 26-year-old explained that she was unable to work out at the moment although she loves being active and healthy. She said that she loves to look and feel strong and she is not a fan of being skinny. Although she would love to eat more and live an active life, she has been in bed for some months and has little control of how her body looks.

The reason she spoke out about this issue, is because she was being accused of promoting anorexia and wanted to tell young girls that this was not her intention.

The star has had a busy year with a schedule that included many work commitments, events, and sponsorships. However, Hyland said that she is working hard on eating well and staying strong. She went on to say that she has been down in her life before but she has always conquered her obstacles, and she will continue to do so always.