Season 6 is Going to Be ‘Crazy’, Reveal Steven Yeun and Melissa McBride

It’s safe to say that Glenn had a difficult time in Season 5 of the Walking Dead.

First, Bob died and then Beth. After this, he had to watch Noah get eaten right in front of his very eyes where Nicholas had left them to die. If that wasn’t enough, Nicholas shot him in a scuffle.

Steven Yeun, who plays Glenn, reveals how Season 6 will turn out, in saying, “So [season] 6 is that, is showing how much has been taken away from us. The end goal is to find some semblance of life that we lost before. I think you’re going to see some deeply emotional character story and you’re also going to see, as we always do, some crazy-ass shit.” 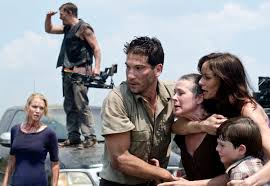 Melissa McBride also concurs in saying that Season 6 is going to be crazy. While being photographed for EW’s Walking Dead cover, she also said that the sixth season will definitely top the others too.

In particular, she says that while they’re all doing the same things, there are people who come in with different points of view and that causes internal conflict between the characters of the show.

In fact, this conflict can lead to these characters having to make tough decisions as to who they are or what they want to be going forward. In other words, people will definitely be battling their inner demons. A number of new characters that come in will also pit people against themselves in terms of where they stand.

Season 6 of The Walking Dead starts October 11 on AMC.