Melvin Potter, the mentally challenged tailor, from Season 1 of Daredevil will become the ‘Gladiator’ in Season 2 – a Twitter post confirms.

Yes, this is the same guy who made Daredevil his greatly-improved red suit but had to work for Kingpin as a result.

The Twitter post sent by Potter himself displayed a circular saw blade that had the character’s initials on it too. What is apparent is that his alliance with Daredevil will be short-lived as soon as Season 2 begins in 2016.

Played by Matt Gerald, Melvin Potter has also made an armored wardrobe for Kingpin. When he is confronted by Daredevil, the latter learns that he has been forced to work for Kingpin. In fact, he has been threatened that if didn’t, someone named Betsy would be hurt. 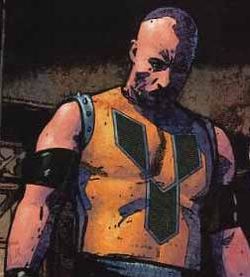 So, Daredevil makes a deal with him. If Potter engineers a suit for him, he will make sure that Betsy is safe.

However, in the comics, the origin of Potter is a bit different. He starts off as a costume designer who hates costume heroes and designs a suit with cutting implements and blades. One day when Foggy visits him to make a Daredevil suit, he ends battling with Gladiator as a result. Only after Daredevil arrives on the scene is the Gladiator defeated.

What will be interesting to see is how Potter turns out to become Daredevil’s foe in Season 2. It wouldn’t be surprising if something happen to Betsy which turns Potter against Daredevil.

Apart from Daredevil, there are three other shows that revolve around events at Hell’s Kitchen. Luke Cage, Jessica Jones and Iron Fist are these shows that will converge into a series called the Defenders – much like the Avengers.