Eubie Blake, who would go on to become one of the most revered pianists and composers of the ragtime generation, was born in February of 1883 in Marylan. By the end of Blake’s life, he’d have formed a partnership with another popular singer-songwriter for the time: Noble Sissle. The two would go on to create the 1921 musical Shuffle Along, which featured a song many of us know and love: “I’m Just Wild About Harry.” 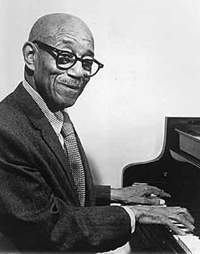 Blake made a name for himself touring performing at night clubs during the the early 1900s. One of his routine haunts was the Goldfield Hotel, owned by Joe Gans, which had hosted his playing since 1907. It was at Goldfield that Blake became known as an exceptional entertainer and musician. Blake also published his own compositions, but lost a lot of money thanks to a lack of ethics on the part of his distributors.Then, in 1910, Blake made a woman he’d revere as full of grace and beauty: his future wife Avis Lee. The two were madly in love until her death in 1939.

Blake didn’t let that tragedy stop him. At the age of 67, he graduated from the music program at New York University. Ragtime became popular again during the 1950s, gaining a deeper appreciation that would carry over for many years. Over that time, Eubie Blake would be understood as one of the great living purveyors of the form..

Blake performed well into his 90s, and he received both the Presidential Medal of Honor and a Broadway musical written about his life.

About the Author: Samuel Phineas Upham is an investor at a family office/ hedgefund, where he focuses on special situation illiquid investing. Before this position, Phin Upham was working at Morgan Stanley in the Media and Telecom group. You may contact Phin on his Samuel Phineas Upham website or Facebook.